“It’s been quite lonely without her”

The original article can be found HERE, it was written by Scott Merzbach for the Daily Hampshire Gazette on November 1, 2018. 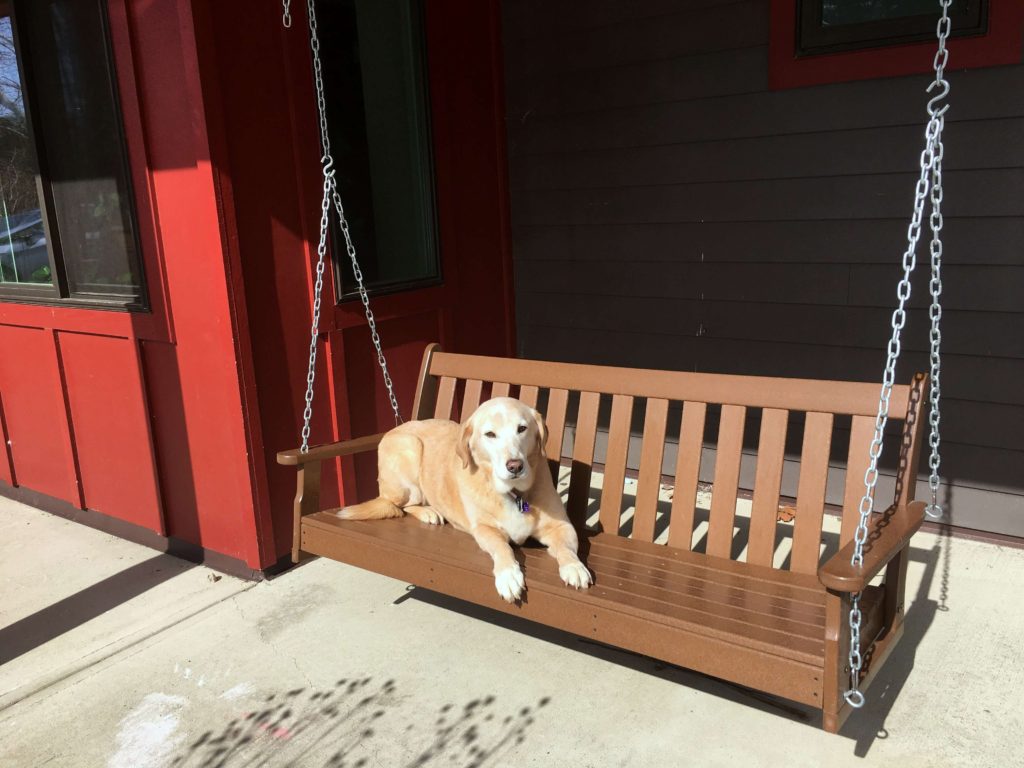 AMHERST — Patients and staff at an Amherst medical practice are mourning the loss of Ginger, a yellow Labrador retriever who, as a certified therapy dog, offered comfort and companionship for the past 13 years.

Ginger, who was last at Dr. Kate Atkinson’s Atkinson Family Practice office Thursday, died over the weekend after a period of failing health.

As an example of how Ginger made the practice welcoming to patients, both at its current site on Research Drive and its previous location on Cottage Street, Jennifer Adams remembers more than a decade ago her then 4-year-old daughter Madison saying, “Mommy, I want to go to the doctor’s with the dog.”

It was a choice they never regretted making.

“Ginger was always a welcome sight and source of comfort when we arrived at Atkinson Family Practice, especially when we weren’t feeling well,” Adams said. “She seemed to sense our feelings and always made our time in the waiting room so much brighter.”

Atkinson brought Ginger to her practice and created the role of therapy dog for her after her last child went off to school and Ginger, not wanting to be home alone, begged to go to the workplace. Though initially only there two days a week, soon patients and staff suggested that she be at the office daily. Patients said they would be disappointed not to encounter her.

Staff, too, had a friend in Ginger, who wandered throughout the two-story building seemingly on a mission to make people feel better, said Cheri Couture, who handles billing at the practice.

Couture, working with Ginger on a daily basis for the past eight years, said she touched many lives and will miss having her come to her desk. “They called us the little dog pound here,” Couture said.

Couture first met Ginger when she came for an initial interview. The dog quickly calmed her nerves, in much the same way she helped lower blood pressures, reassured nervous children and greeted upset patients.

Nicole Smigiel, the functional medicine receptionist, said Ginger would often be in the waiting room and would stare at her through the window, just waiting for kisses and treats.

“She always brought a lot of brightness to the day,” Smigiel said.

Ginger became a trained therapy dog with Bright Spot Therapy Dogs in Leeds. While this made her official, Atkinson said, “Ginger’s skills were just part of who she was.”

Nancy Ackerman, phlebotomist for Baystate Reference Laboratories, said Ginger would calm down adults having their blood drawn. This week hasn’t been the same, she said. “It’s been quite lonely without her,” Ackerman said.

Even those who aren’t patients of the Atkinson Family Practice likely knew her. In 2012, Ginger played Sandy in the Amherst Leisure Service Community Theater’s production of the musical “Annie.”

She was also a presence each year at the Daffodil Fun Run to benefit Big Brothers Big Sisters of Hampshrie County.

“Thank you for everything and I promise to smile every day when I think of you,” Couture wrote.

Scott Merzbach can be reached at smerzbach@gazettenet.com.

I have been surfing online more than 4 hours today, yet I never found any interesting article like hier. Its pretty worth enough for me.