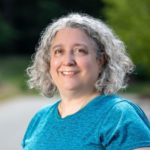 Welcome to TMS Treatment at Atkinson Family Practice. We provide patients in Amherst, MA and surrounding area the latest in depression treatments. We are pleased to be able to offer Neurostar® TMS Therapy to our patients. Transcranial Magnetic Stimulation Therapy is one of the most technologically advanced depression treatments available. This non-invasive, outpatient therapy is FDA cleared and has helped thousands of depression patients who have not received adequate results from antidepressants. TMS (Transcranial Magnetic Stimulation) is the first and only FDA Approved treatment for depression that does not require surgery or medication, and is safe and effective. TMS has had extensive research to back it up at several major medical research universities, and the only side effect is slight scalp discomfort during the actual procedure.

“I am so excited to have a non-pharmaceutical treatment right here in the office for people suffering from depression. The studies using TMS technologies fill me with optimism, and I’m looking forward to a brighter future!” - Dr. Kate

NeuroStar TMS Therapy is the first non-systemic and non-invasive outpatient depression treatment cleared by the US Food and Drug Administration (FDA) for patients who have not benefited from prior antidepressant treatment. NeuroStar TMS Therapy uses highly focused, pulsed magnetic fields to stimulate function in targeted brain regions.

Clinical trials have demonstrated the effectiveness of NeuroStar® TMS Therapy in treating patients who have not benefited from prior antidepressant medication. NeuroStar TMS Therapy was studied in adult patients suffering from Major Depressive Disorder, all of whom had not received satisfactory improvement with previous treatments.

An Effective and Durable Option for Treating Major Depressive Disorder

In an independent, randomized, controlled trial funded by the National Institute of Mental Health, 307 patients were treated with the NeuroStar TMS System for 4 to 6 weeks, similar to real clinical context.1

Patients were divided into two groups: 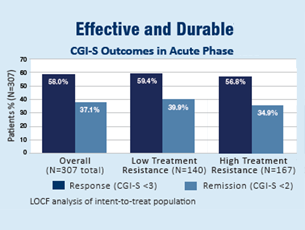 At the end of their treatments, patients who had received NeuroStar TMS Therapy were four times more likely to achieve remission compared to patients receiving a sham treatment. 1 in 2 patients experienced significant improvement in their depression symptoms and 1 in 3 experienced complete remission. Patients treated with the NeuroStar TMS System also experienced significant improvement in anxiety and physical symptoms (such as appetite changes, aches and pains, and lack of energy) associated with depression.1

NeuroStar TMS is the only TMS system with the durability of its effects established over 12 months.

In a trial with physician directed standard of care, meaning Neurostar TMS Therapy could be used in conjunction with antidepressants as needed, patients who had received treatment then reported their symptom levels at 3, 6, 9 and 12 months to determine the durability of their treatments. By the end of the 12-month period, 2 out of 3 patients who had either responded or completely remitted after TMS treatment remained at the symptom levels they reported at the end of the treatment phase.1

After the end of the treatment period, only 1 in 3 patients needed to come back for maintenance TMS sessions, or ‘reintroduction’ during this 12-month period.1

Additionally, Neuronetics has developed a new tool to use in educating patients on the best practices of treating depression. The Best Practices Treatment Guideline for Depression has been developed to help patients understand TMS Therapy as an option if their first line antidepressant medications stop working. This guideline is based on the 2010 American Psychiatric Association’s practice guidelines and NeuroStar TMS Therapy indication for use, which says:

NeuroStar TMS Therapy is indicated for the treatment of major depressive disorder in adult patients who have failed to achieve satisfactory improvement from prior antidepressant medication at or above the minimal effective dose and duration in the current episode.

Please see the Treatment Algorithm for an effective illustration of the use of NeuroStar TMS Therapy early on in the treatment of depression.

NeuroStar TMS Therapy has not been studied in patients who have not received prior antidepressant treatment.

Clinical trials have demonstrated the safety of NeuroStar TMS Therapy® in treating patients who have had an inadequate response to prior antidepressant medications.

Treatment with NeuroStar TMS Therapy caused very few side effects and was generally well tolerated by patients. The most common side effect reported during clinical trials was scalp discomfort—generally mild to moderate and occurring less frequently after the first week of treatment.

Fewer than 5% of patients discontinued treatment with NeuroStar TMS Therapy due to adverse events.

Over 10,000 active treatments were performed across all NeuroStar® clinical trials demonstrating its safety1

A NeuroStar® TMS Therapy treatment session is a short outpatient procedure that lasts about 19-37 minutes, depending on what the doctor determines is the correct protocol. During treatment, you can relax in the treatment chair. You can also speak with our TMS Specialists whenever necessary. After the procedure, you can immediately return to your normal routine, including driving.

Because your TMS-certified physician needs to determine how to most effectively administer treatment, your first session could last up to an hour and a half. You will be provided and asked to wear protective earplugs, as the system emits a tapping sound during operation.

After this initial procedure, the TMS physician will determine the place on the head where the TMS treatment will be applied and the magnetic coil will be moved to that location. This will allow you to receive optimal treatment.

The TMS Specialist will then administer TMS Therapy over an approximately 19-40 minute period. In 30-second intervals, the device will deliver rapid “pulses” of the magnetic fields. These will feel like tapping on your scalp. Some patients may find this tapping uncomfortable. Your physician may be able to make adjustments to reduce this discomfort.

Immediately following each treatment session, you may return to your normal daily routine, including driving. During or after treatment you may experience headache or discomfort at the site of stimulation. These are common side effects that often improve as further treatment sessions are administered. If necessary, you can treat this discomfort with an over-the-counter analgesic. If these side effects persist, your TMS physician can temporarily reduce the strength of the magnetic field pulses being administered in order to make treatment more comfortable.

In clinical trials, most patients who benefited from NeuroStar TMS Therapy experienced results by the fourth week of treatment. Some patients may experience results in less time, while others may take longer. You should discuss your depression symptoms with your physician throughout the treatment course. If symptoms persist, you may want to consider other antidepressant options.

Since the FDA clearance of TMS in 2008, insurance coverage for eligible patients has increased significantly. Currently, there are over 60 coverage polices for TMS, including most Medicare contractors. Although TMS is not a first line of treatment, it is an alternative option for those who are not responding to or cannot tolerate medications. Patients are encouraged to speak directly with their Doctor regarding any specific insurance questions. Patients can also contact a Reimbursement Specialist and receive assistance with understanding insurance coverage and verifying insurance benefits. For a list of the insurance companies and applicable states that cover TMS Therapy, please click here.

Atkinson Family Practice (AFP) began Transcranial Magnetic Stimulation (TMS) in March 2016 under the direction of Dr. Nora Schwartz-Martin, MD. TMS is a natural addition to the integrative practices happening at AFP, and a much needed service to the western Massachusetts area. Dr. Schwartz-Martin strongly values the benefits of integrative medicine, and is thrilled to see TMS helping so many patients.

Dr. Schwartz-Martin was trained in psychiatry at New England Medical Center, Cambridge Health Alliance, and Harvard University Student Services. She has also received extensive training in psychopharmacology and emergency psychiatry. She and her husband are the proud parents of two boys, and their many talents continue to amaze them every day.